Ethiopia: To achieve peace, take Eritrea out of the game 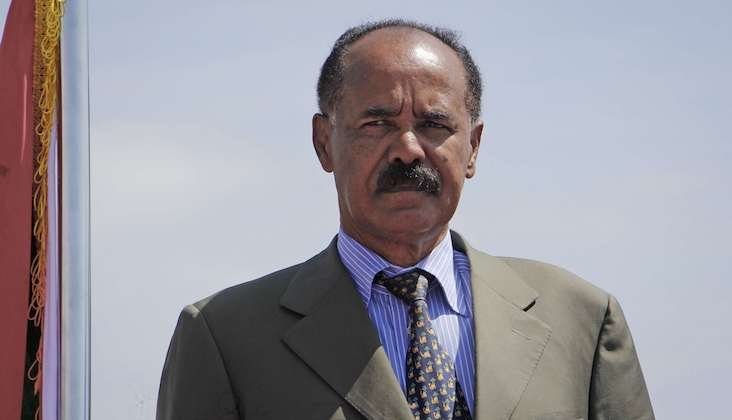 Eritrea's President Isaias Afwerki stands for a military parade after being welcomed by Somalia's President Mohamed Abdullahi Mohamed upon arriving at the airport in Mogadishu, Somalia, on Thursday, Dec. 13, 2018. (AP Photo/Farah Abdi Warsameh)

Since its independence three decades ago, Eritrea has been involved in international conflicts, ranging from minor border skirmishes with its neighbors, such as Sudan, Djibouti, and Yemen, to a full-fledged conventional war with Ethiopia. Its notoriety as a regional troublemaker had resulted in the imposition of crushing sanctions lasting several years.

While the Eritrean dictator, with an assist from Abiy Ahmed of Ethiopia, had sought to rehabilitate Eritrea’s image as a rogue state, Eritrea’s direct involvement in the war on Tigray since November 2020 and the massive human rights violations its forces committed and continue to commit have reaffirmed this well-deserved image.

Eritrea has lost tens of thousands of its citizens in Tigray not to realize a discernible national objective but to avenge some perceived wrong that Isaias suffered at the hands of Tigrayans and validate his delusions of grandeur as a regional heavyweight.

As international human rights advocates and various institutions have amply documented, the Eritrean military has committed some of the most horrific violations of the laws of armed conflicts, such as the brutalization of civilians, the deliberate destruction of civilian installations, the plundering of private and public wealth, and the use of sexual violence as a tool of war.

Eritrea’s brutal military campaign in Tigray has received the blessing of the Abiy regime and that of the expansionist Amhara elites.

Despite deep, historical animus towards the Amhara, the Eritrean dictator has struck up a tactical alliance with the expansionist Amhara elites, a marriage of convenience facilitated by a convergence of interests.

Isaias sees Tigray as standing in the way of his dream to run wild in Ethiopia in particular and the wider region in general; similarly, Amhara expansionist elites see Tigray as impeding the restoration of a bygone era when unitarism reigned supreme.

Isaias’s alliance with Abiy and the expansionist Amhara elites has two purposes. First, by lending military support to the anti-Tigray coalition within Ethiopia, Isaias seeks to marginalize and ultimately eliminate TPLF and, by extension, Tigray as a potent force in Ethiopian politics.

Isaias harbored revenge fantasies against Tigray for leading the military campaign that ended his dream of becoming the dominant political and military power in the Horn of Africa and beyond.

Specifically, Isaias had been nursing grudges against Tigrayan military and security elites, which he considers responsible for his embarrassing defeat on the battlefield and crushing his dream of becoming a regional kingmaker. Second, he would realize his vision of destroying the multinational federal dispensation that the people of Tigray played a major role in midwifing and preserving over the past three decades.

All in all, Isaias saw the formation of an alliance with anti-TPLF forces as critical to removing one major stumbling block to his dream of transforming Eritrea into a regional “powerhouse” and breaking up Ethiopia into several mutually antagonistic units.

There is a stark irony in the alliance between the expansionist Amhara elites and the Eritrean dictator. On the one hand, Amhara elites rage against the Tigray People’s Liberation Front (TPLF) for presumably blessing Eritrea’s independence. On the other hand, the same rapacious elites have entered into a Faustian bargain with the Eritrean dictator to eliminate a “problematic” domestic rival.

The expansionist Amhara elites have sought to degrade and ultimately destroy Ethiopia’s multinational federalism, vociferously arguing in favor of, and working towards, a unitary system. By contrast, Tigrayans are adamantly opposed to this unitarist vision. A system designed to govern a diverse polity like ours is bound to have shortcomings.

Ethiopia’s current federal system is no exception. But discarding a fundamentally sound political framework that needs some tweaking in favor of a unitary system that disregards Ethiopia’s objective conditions is not a solution conducive to long-term peace and stability. The return of a unitary system, by reversing hard-won autonomy and self-administration and self-determination rights, would intensify centrifugal challenges to the central state, in the process unleashing a paroxysm of violence on every corner of the country.

As for Abiy, his alliance with Eritrea has had less to do with “ending” the Ethio-Eritrea war and ensuring regional stability than eliminating a nettlesome domestic rival. The convergence of Abiy’s interest in maligning, scapegoating, and neutralizing the TPLF and Isaias’s desire to see the TPLF removed from Ethiopia’s political scene led to a marriage of convenience between the authoritarian duo. This marriage of convenience was consummated in a formal agreement to “end” the border conflict between the two countries.

Rather than seeing through this transparent subterfuge, the international community awarded Abiy the Nobel Peace Prize in 2019, which he interpreted as legitimizing the broad contours of his domestic and foreign policy agenda. Having received the legitimacy of international acclaim for his apparent reform agenda, Abiy Ahmed took a series of actions that ultimately developed into one giant calamity: the genocidal war on Tigray.

With battlefield losses piling up, and his regime teetering on the brink of collapse, Abiy Ahmed took different but tired rhetoric for a test drive. According to this narrative, the war pitted a cabal of “neocolonial” forces against Ethiopians, who had fought against colonial encroachments and won a resounding victory at Adwa.

However, Abiy never invokes Pan-Africanism as a substantive principle that has the potential to enhance solidarity among African nations and revolutionize an indigenous conflict prevention and resolution mechanism but as a buzzword designed to shield himself from critical scrutiny of his horrific record on Tigray. In fact, Abiy conflates being asked not to starve and bomb his citizens into submission with assaults on “Pan-Africanism.”

Despite the Abiy regime’s shameless framing of the war in terms of a Western neocolonial project and presenting itself as valiantly resisting this neocolonial encroachment, the fact is that only the Abiy regime has actively solicited and received the support of non-African countries to wage a genocidal war on his own people. Designed to frame the conflict as the West versus Africa and, through such framing, enlist the support of African countries, the disingenuous propaganda does not pass muster except with those that have already made significant investments in this genocidal campaign.

In light of Eritrea’s deep involvement in the genocidal war on Tigray and the counterproductive alliance with the expansionist Amhara elites, any possibility of ending the war through a negotiated settlement goes directly through Asmara. This is so not in the sense of Isaias having a peacemaking bone in its authoritarian constitution, but because he has a tremendous capacity to play the role of a spoiler--an actor that sees peace emerging from negotiations as a threat to its power, interests, and worldview, and uses violence or the threat of it to frustrate attempts to achieve peace.

Abiy enunciates lofty ideals that, is sincerely committed to, could help us end the current conflict through dialogue. But he may find it difficult to wean himself off the fateful alliance with the expansionist Amhara elites and that of the Eritrean dictator. As long as he remains hostage to these forces, he will have little room to maneuver and exercise a degree of policy autonomy required to take a bold step towards peace. Accordingly, breaking up this unholy alliance is necessary, if not sufficient, to give peace a chance.

The use or threat of sanctions against Abiy and his regime can still impact bringing him to the negotiating table. But absent robust measures that significantly affect the Eritrean dictator’s cost-benefit calculus, the quest for peace will prove elusive. As an experienced leader of a rogue state, the Eritrean dictator has practically authored a manual for navigating a treacherous international diplomatic terrain.

Only sufficiently robust actions that create disincentives for the Isaias regime against continual involvement in the Ethiopian conflict have a reasonable chance of helping bring about a peaceful resolution of the current conflict.