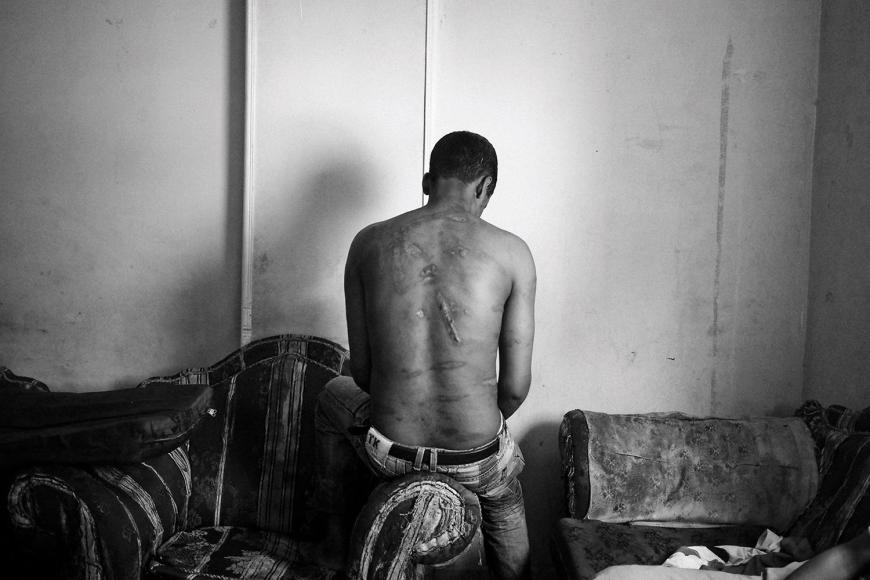 The scarred back of an Eritrean asylum seeker in Cairo who says Egyptian traffickers tortured him for ransom in Egypt’s Sinai peninsula by dripping molten plastic onto his back, May 2013. © 2013 Moises Saman/Magnum

On December 24, 2021, Egypt deported 24 Eritrean asylum seekers, including children. UN human rights experts, including the special rapporteurs on Eritrea and on torture, earlier protested the forced return in October and November of 15 Eritreans, including at least 7 asylum seekers, saying that others previously returned had been “tortured, held in extremely punitive conditions and disappeared.”

“Egypt should stop forcing Eritreans to return to a country where they face serious risks of arbitrary detention and torture and allow them full access to asylum procedures,” said Joe Stork, deputy Middle East and North Africa director at Human Rights Watch. “The Egyptian authorities should also immediately halt the immigration detention of children.”

As of November 2021, according to UNHCR, the UN refugee agency, Egypt hosted 20,778 UNHCR-registered Eritrean asylum seekers and refugees. There is no data on the number of undocumented Eritrean asylum seekers and migrants in Egypt. Ongoing barriers to asylum in Egypt – arbitrary arrests and detention of asylum seekers, refugees, and other migrants, and the lack of UNHCR access to some detainees – suggest that many other Eritreans in Egypt needing protection face a high risk of deportation. The 24 Eritreans deported on December 24 were not registered with UNHCR.

The summary deportations of Eritrean asylum seekers violate the international legal prohibition on refoulement, or forced return to a country where people may face threats to their lives or freedom, torture, or other serious harm.

Relatives and Eritrean community leaders in Egypt told Human Rights Watch that none of the nine were allowed access to UNHCR or to official asylum procedures. They said Egyptian police brought the nine from Aswan, where they were detained, to the Eritrean embassy in Cairo, where Eritrean embassy officials identified them as Eritrean nationals, issued them travel documents valid only for Eritrea, and pressured them to sign a “voluntary” return agreement, which they refused to do.

The sources said that on December 21, 2021, the police took five of the nine back to the embassy, where officials coerced them into signing documents – in Arabic, which they cannot read – which may have been related to their deportation.

Eritrea’s repressive government requires all citizens under 50 to serve in national or military service indefinitely, often years longer than the 18 months authorized by law. Conscription into the country’s abusive indefinite national service begins at high school, where thousands of Eritrean secondary school students, including both girls and boys under 18, are conscripted each year. Anyone of draft age leaving the country without an exit permit is perceived to be a deserter, risking imprisonment in often inhumane conditions, as well as forced labor and torture.

Authorities arrested the nine asylum seekers on various dates between May and October 2021 in Aswan as they were about to board trains to Cairo to register with UNHCR. Relatives said eight detainees in the Daraw police station were confined in small, overcrowded rooms and denied adequate food and medical care for serious conditions, including allergies, a bacterial infection, and, in one case, frequent loss of consciousness. One man was detained separately.

One child still in detention urgently needs dental care and possibly surgery, while another suffers severe shortness of breath, the relatives said. A cousin of one of the detained children told Human Rights Watch that “the police station allows half of [the child’s medications] only and confiscates the other half for no reason.”

The family members said they did not know whether the asylum seekers had been brought before an Egyptian court. They said the police had not informed the detainees whether they had been charged with a criminal offense and did not respond to requests for information from family members. The relatives said they had no information on the group’s legal immigration status and that the authorities had denied the detainees’ access to legal representation.

Seven out of the nine asylum seekers had fled Eritrea to escape mandatory military service, their relatives said. They said that one, a 16-year-old girl currently detained, was a UNHCR-registered refugee in Sudan who fled to Egypt in September due to the political unrest in Sudan.

Relatives said that another, who turned 18 while in detention and was among those deported, was a UNHCR-registered refugee in Ethiopia. They said he had fled to Egypt in early May 2021 after the outbreak of armed conflict between Ethiopian federal forces with their allies, including Eritrean armed forces, and a Tigrayan armed group affiliated with the region’s former ruling party, the Tigray People’s Liberation Front. When the conflict broke out in Ethiopia’s Tigray region in November 2020, Ethiopia hosted approximately 149,000 registered Eritrean refugees, most living in Tigray. During the fighting there, Eritrean forces destroyed two Eritrean refugee camps. UNHCR officials told Human Rights Watch that they could not confirm whether the two had been registered in Ethiopia and Sudan.

The travel documents that Human Rights Watch has on file show that the 24 deportees included six children, seven women, and five men. Human Rights Watch could not confirm the profiles of the rest. According to Eritrean community leaders, all 24 had been arbitrarily detained in inhumane conditions for months in Aswan governorate at several police stations and at the central security camp in the al-Shellal region.

According to the Refugees’ Platform, an Egyptian group providing support for migrants and refugees, dozens of Eritreans, including children, are currently detained in Aswan, a southern city that is the main entry point for asylum-seekers coming from Sudan. The number of Eritrean detainees in the Aswan governorate appears to be increasing; another 10 Eritreans were arrested on December 22, an Eritrean community leader told Human Rights Watch.

President Abdel Fattah al-Sisi claimed on January 11 that Egypt had received six million refugees or other migrants fleeing conflict or poverty, emphasizing that Egypt “neither prevented them [from entering] nor forced them into camps” – though he did not provide details on these populations or their period or arrival.

The Refugees’ Platform said it had documented 55 cases of Eritreans detained in police stations in the Aswan and Red Sea governorates throughout 2021. A staff member with an international aid agency said that as of December 14, 2021, 44 Eritrean children were among those detained in Aswan.

Two Eritrean refugees detained in an Egyptian prison since 2012 and 2013 were released on January 20 and resettled in Canada.

Egypt is a party to both the 1951 UN and the 1969 African refugee conventions, which prohibit refoulement of refugees and asylum seekers. It is also a party to the 1984 Convention against Torture, which bans forced returns of people to countries where there are “substantial grounds” for believing the person would face risks of torture.

Detention without due process or adequate procedural safeguards is also arbitrary, prohibited by regional and international human rights law. People should not be detained for immigration purposes if their detention is not necessary and proportional to achieve a legitimate, lawful aim.

“By arbitrarily detaining people in need of protection and preventing them from seeking asylum, the Egyptian government is violating its international legal obligations,” Stork said. “Egypt should protect asylum seekers rather than forcibly deporting them to risk of grave harm.”